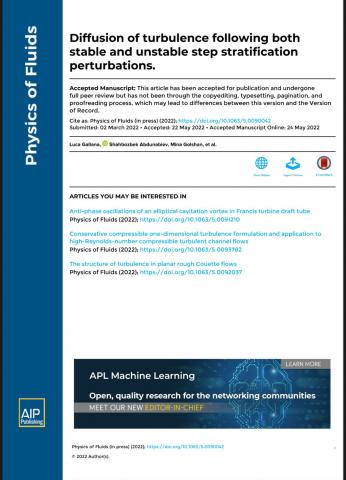 The recent paper has been published in Physics of Fluids with a following title:

The evolution of a two-phase, air and unsaturated water vapor, time decaying, shearless, turbulent layer has been studied in the presence of both stable and unstable perturbations of the normal temperature lapse rate. The top interface between a warm vapor cloud and clear air in the absence of water droplets was considered as the reference dynamics. Direct, three dimensional, numerical simulations were performed within a 6m x 6m wide and 12m high domain, which was hypothesized to be located close to an interface between the warm cloud and clear air. The Taylor micro-scale Reynolds’ number was 250 inside the cloud portion. The squared Froude’s number varied over intervals of [0.4; 981.6] and [-4.0; -19.6]. A sufficiently intense stratification was observed to change the mixing dynamics. The formation of a sub layer inside the shearless layer was observed. The sub-layer, under a stable thermal stratification condition, behaved like a pit of kinetic energy. However, it was observed that kinetic energy transient growth took place under unstable conditions, which led to the formation of an energy peak just below the center of the shearless layer. The scaling law of the energy time variation inside the interface region was quantified: this is an algebraic law with an exponent that depends on the perturbation stratification intensity. The presence of an unstable stratification increased the differences in statistical behavior among the longitudinal velocity derivatives, compared with the unstratified case. Since the mixing process is suppressed in stable cases, small-scale anisotropy is also suppressed.